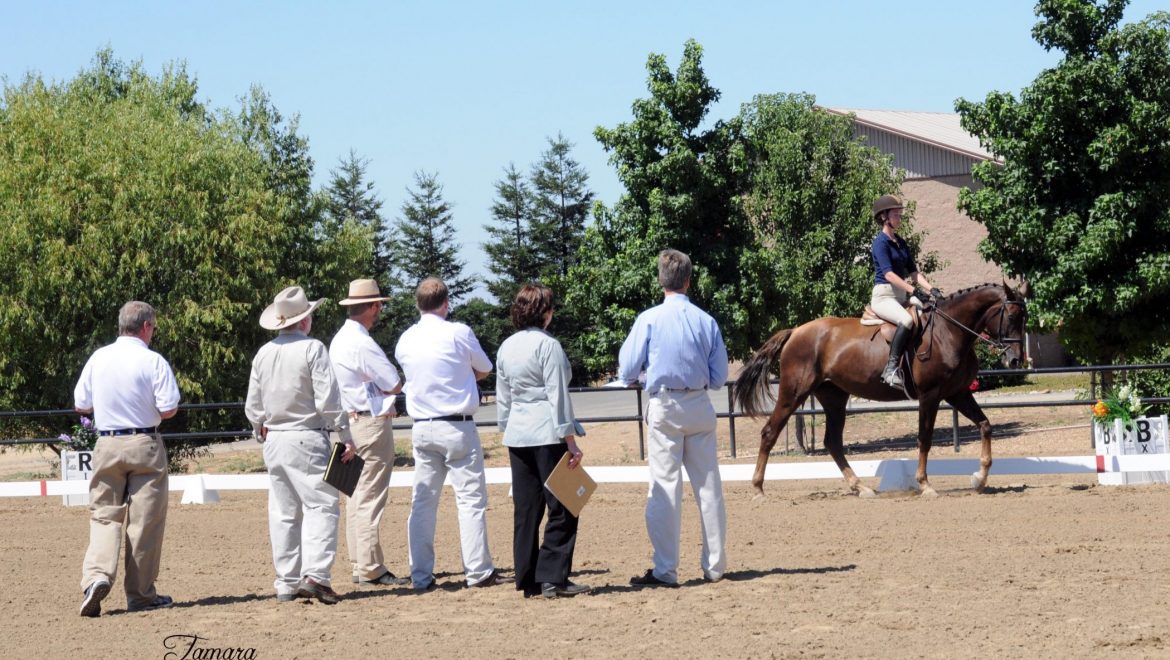 Owners are encouraged to performance test their mares to determine their rideability and whether their talent lies in jumping or dressage. A study in Germany shows a high correlation between the Mare Performance Test (MPT) results and the ability to predict the talents of a mare's offspring. The test is not required, but can be an invaluable aid in determining the breeding goal for a mare. Genetic correlations, especially related to jumping and the high correlation of inheritability of gaits. make the Mare Performance Test a very important tool in deciding whether to breed a mare for jumping or dressage offspring.

The Mare Performance Test evaluates a mare's rideability, gaits and jumping talent, with each area weighted one-third in the final score. During the under saddle portion of the test, a mare's gaits are rated in addition to her temperament and character. Mares must be able to show a lengthened stride in each gait and such simple dressage movements as a three loop serpentine and free walk on a loose rein. The jumping portion of the test is conducted in a jumping chute without a rider rather than over a jump course with a rider. The mare's technique and scope are scored.

There are three components for the MPT: rideability, gaits (average of walk, trot and canter scores) and jumping (average of technique and ability scores). Prior to 2006, the scores for each aspect were awarded as whole numbers. The three component scores of rideability, gaits and jumping are then added together and divided by three to obtain the Total Score. In 2006, the AHS Mare and Stallion Committee voted to allow the use of both whole numbers and half-numbers, e.g, 7.0 or 7.5, in the scoring of the MPT. This practice has been adopted by the HV in Germany and has been shown to permit the judges to more accurately and fairly rate the mares.

There are five main reasons for performance testing a mare. One is to obtain a performance record to use as a tool in making breeding decisions; another is to attain Elite Mare status with an Elite Eligible mare. A third reason for testing is to enable certain mares to advance to the Main Studbook. Fourth, a mare with an eligible pedigree that attains a score of eight (8) or better on the jumping portion of the performance test may be entered into the Jumper Breeding Program. Additionally, in 2009 the AHS board of directors approved a modification to the scoring system whereby a mare that meets the other requirements for Elite eligibility but does not score an overall 7.0 on inspection (42 points) or a non-Hanoverian mare that does not obtain the necessary overall 7.0 or better for entry into the studbooks may have her free jumping score added to the overall inspection score with the resulting total divided by 7 (instead of 6). If this new total is 7.0 or better that result would count towards Elite eligibility (in the case of eligible Hanoverian mares) or Main Studbook acceptance (in the case of non-Hanoverian mares).

Performance Record – All mare owners are encouraged to test their mares as proof of their rideability and athletic ability. It is also recommended that dams of all stallion prospects have passed the Mare Performance Test.

Elite Mare Status – To attain Elite Mare Status the mare must be in the Main Studbook and be out of a Main Studbook mare. She must have scored an absolute overall 7 upon inspection. Inspection scores must be verified before a mare will be allowed to test for Elite Mare status. This mare must then pass the performance test according to the prescribed criteria, and then produce an AHS-registered foal to achieve full Elite status.

The Riding Test – During the under saddle portion of the Mare Performance Test, the mare is judged on rideability, temperament and character. The under saddle phase is not a dressage test. However, the mare must be trained to perform the following movements when instructed.

The rider will be asked to walk, trot and canter, the mare up to 1500 meters so that her rideability can be elevated separate from her gaits. This phase is to enable the commission to see the best gaits and way of going. The mare should be ridden well forward - it is not being judged as if in a dressage test.

All jumping in the Mare Performance Test is conducted through a chute without a rider. Most jumping chutes are set up on a 21-foot distance with a crossrail followed by a vertical and then an oxer. As the test progresses, the height of the last element is raised to test the mare’s scope and ability. Two excellent articles on free jumping are available from the Central office: “Free Jumping: Technique, Ability and More,” by the HV’s Ludwig Christmann, and “Some Thoughts on Free Jumping,” by Volker Ehlers, Vice-President of Glenwood Farms in Roundup, Mont. Additionally, "The Mare Performance Test - Frequently Asked Questions," by Suzanne Quarles is available as a PDF download from this site.

Regarding Elite Mare status and studbook upgrade, performance achievements in dressage, combined training or hunter and jumper shows may be considered in lieu of the MPT. Contact the AHS Central Office for additional information.