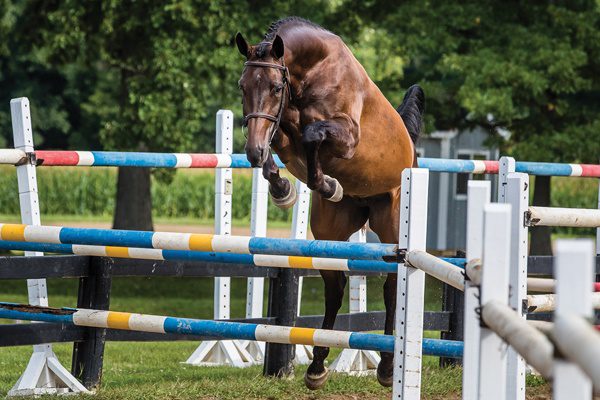 Donated by a generous AHS member who wishes to remain anonymous, The Benchmark Farm Trophy recognizes mares that show exceptional jumping ability during their Mare Performance Test (MPT). This award is presented to the mare that achieves the highest combined score on the jumping part of the MPT in a calendar year.

Mares are awarded a score for “technique” and a score for “ability” during the free jumping part of the Hanoverian MPT. “Technique” refers to the form – the use of the body – the mare shows as she goes over the fences, especially the large oxer at the end of the chute. “Ability” refers to the innate talent and willingness of a mare to jump a fence of good size height and width. These two scores will be used to determine the winner(s).

I hope that each year’s winning mare sets a new benchmark of excellence in her jumping, which is such an important attribute of our wonderful Hanoverian breed.

The winning mare(s) may have been born in any country, and does not have to be Hanoverian—Thoroughbreds, Arabians, or any of the other Warmblood mares that are taking our testing are eligible. Also, there is no age limitation. Because it is likely that more than one mare may achieve the same high score in any calendar year, the prize will be awarded to all mares that tie for the highest score in a given year.

The details of the MPT High Score Jumping Award are as follows: 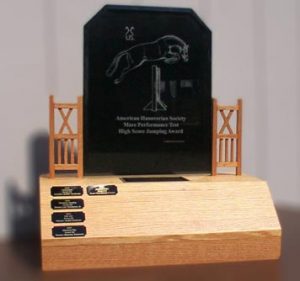 For this award, on behalf of our generous sponsor, a beautiful glass piece was commissioned that will reside in the AHS office, with the winners’ names to be engraved on plaques that will be placed on the base each year. On the glass is etched a lovely mare jumping a fence in beautiful form.

In honor of the award designer Phyllis Hamilton of Benchmark Farm Studio, the new award is known as the Benchmark Perpetual Trophy.

The AHS Board of Directors thanks our generous member for proposing and sponsoring this award, and congratulates the winning mares that showed such exceptional jumping ability in their performance tests!