What exciting weeks these have been! The Bundeschampions have been determined and the young dressage horses have found their World Champions. Most of the registration trips are behind us. The last trips took the team from Studbook International to the Czech Republic, Austria, Slovakia, Sweden, and Denmark. Reports on the trips can be found in this newsletter.
Another highlight this year is still ahead of us: the auction of foals from international breeders, which will take place online like last year. Foals from France, Belgium, Poland, and England are looking for a new home this way. So it is worth having a closer look at the collection!

Currently, the Hannoveraner Verband e.V. is conducting a member survey. The link to the survey has been sent out separately but will be in the newsletter as well. Thank you in advance for your participation 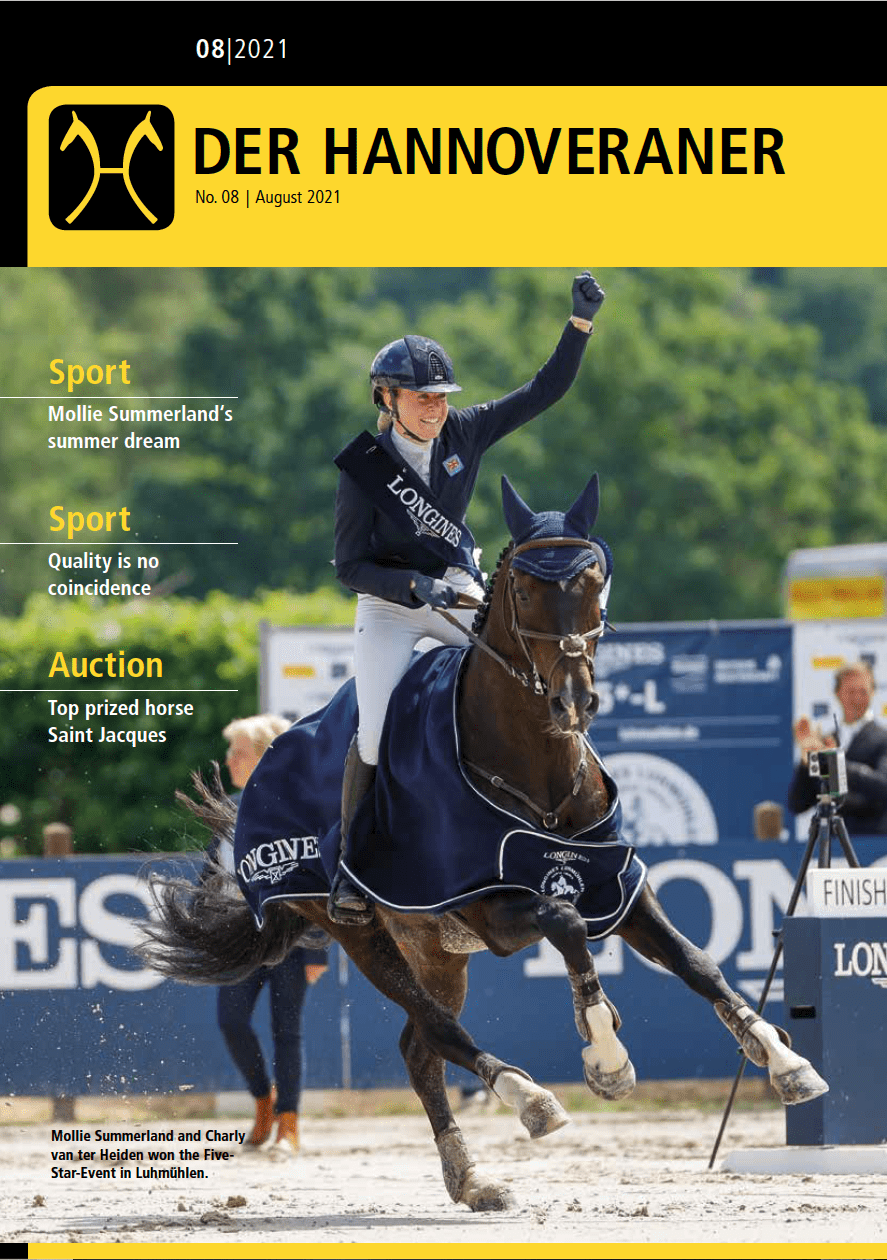 Dear members of the Hannoveraner Verband,

we are conducting a member survey.
In order to position the Hannoveraner Verband for the future, we would like to know from you how happy you are with the tasks and services provided by us, what you associate with the Hannoveraner horse and the Verband and what direction you personally pursue with your horse breeding.
It is important that as many people as possible participate. We are all important in our community and accordingly we ask you to participate in our survey. Only then can we develop in the right direction!

Among all participants we raffle:
- 50 times a 20 Euro voucher for the Hannoveraner Shop
- 25 times the book HANNOVERANER - Breeding and Development of the worldwide popular horses

We thank you in advance for your participation!
Your team of the Hannoveraner Verband e.V.

The countdown to the 8th Verden Auction Online for foals -International- 2021 is on. From September 6 to 9, you have the opportunity to secure one of the highly interesting offspring from international breeders! The Hannoveraner Verband e.V., as an internationally operating breeding society, would like to give every member the opportunity to participate in an auction.

In the Auction Online for Foals -International- 2021 - Europe- you can expect among others offspring of Cornet Obolensky, Casino Grande, In My Mind, Lord Europe and Emilio Sanchez. As a special highlight the full sister to D'Avie FRH will complete the collection.

In the Auction Online for Foals - International 2021 - England - Offspring of Dancier Gold, Dream On, Flammengold, Franklin and Vaderland await you.

The collection goes online on Thursday, September 2. All information, videos and highlights can be found then athttps://link.edgepilot.com/s/d8ea17a4/JLzwO23CMkOnduGikcfsFQ?u=http://www.verdener-auktion-online.com/. Feel free to contact our customer advisors at any time!

On August 14, this year's foal show of the Hannoveraner horse breeding club in Sweden " Svenska Hannoveranerklubben" took place in Laholm.

13 foals were presented and four were awarded with the desired "Gold Medal". Among them the best dressage colt C Aston MT by Confess Color/Dalwhinnie (breeder: Minna Telde, SWE). The best dressage filly was by Valdiviani/Desperados, bred and owned by Sven and Dana Schüssler, SWE. From the same dam line, the breeders produced another foal, a colt by Damaschino/Rotspon, which was awarded a Gold Medal. Winner of the jumping foals was Constantina, a filly by Conthargos/Stakkato (breeder: Roland and Jonas Olthoff, SWE b.: Expara, SWE).
Then it was off to neighboring Denmark for several days. Breeders on Zealand, Fyn and Jutland were visited during home visits, foals were registered and inspected, and mares were entered into the studbook. While last year the travel restrictions could be clearly noticed, this year it was much more relaxed. Many breeders took advantage of this opportunity to be visited, which was noticeable in the good feedback and number of the many stops.

August 15 has become a fixed date in the Hannoveraner calendar. As in previous years, the 2021 HAnnoveraner Tag was held on this day at the Equestrian Center Austria in Gerasdorf near Vienna.The mare performance test and mare show are embedded in an advanced training event for judge candidates and judges in cooperation with the Austrian Equestrian Federation.  Dr Susanna Kleindienst with her family and her dedicated team had the facility well prepared and organized the event perfectly. In the small mare performance test, four Hannoveraner mares were presented, all of which were presented by their riders at a good level of training. Two of them could be awarded afterwards in the small mare show as Hannoveraner premium candidates. These were the Bon Coeur/Fürst Rousseau daughter Bonne Foi, bred and owned by Claudia Kellner, Vienna, and the Sir Wanabi/Winterprinz daughter Serafina, bred by Sandra Laprise in Canada and owned by Sandra McPherson.  The best mare of the small mare show, however, was another mare. This was the only three year old Vitalis/Embassy daughter Vienna Calling K, bred by Dr. Susanna Kleindienst herself.  Big thanks to the Austrian Hannoveraner breeders for accepting the offer of this mare performance test.

During the registration trip through Austria numerous foals could be registered. Thereby 13 times a Gold Medal could be awarded. The dressage horse breeders were in the majority, but in terms of quality, the show jumping foals presented were equally good. The highest rating of the show jumping foals was a colt by Mylord Carthago out of the successful Selle Francaise mare Carrera Semilly by Diamant de Semilly bred and owned by Carmen Karpf. A second Gold Medal was awarded to Carmen Karpf for an expressive filly by Diamant de Semilly out of the right sister of the Bundeschampion Sandokan by Stakkato. Gold Medals were also awarded to jumping foals bred by Friedrich Radauer (colt by Dubliner/Chin Champ) and Josef Frech (colt by Casallo Z/ Carthago). Nine Gold Medals were awarded to dressage foals. The highest score was achieved by a colt by Bon Courage/Floriscount bred and owned by Nina Wagner. Three Gold Medals were awarded to Dr. Christine Feichtinger for foals by Secret out of dams by Vivaldi, For Romance and Bon Coeur. Romana Heinz won two Gold Medals for foals by Morricone/Fuerstenball and For Gold/Danone. Other Gold Medals went to foals by breeders Andreas and Emmerich Hobel (So Unique/ Rotspon), Kathrin Göllner (Christ/Fürst Heinrich) and Marianne Jerich (Damaschino/Fidertanz).

Following Austria, the trip went through Slovakia to the Czech Republic. In both countries the main focus is on breeding show jumpers, this year we were presented exclusively with foals with show jumping pedigrees. A foal by Namelus R out of a dam by Ludwig von Bayern (breeder: Polet) was awarded a Gold Medal.

The main pillar for Hanoverian breeding in the Czech Republic is the Staj Mustang Stud. All 13 gold medal foals in the Czech Republic came from stallions stationed at Staj Mustang. A strong vintage was presented perhaps for the last time by the Grande Prize winner Quaid, who unfortunately passed away last year. Five of his foals could be awarded with the Gold Medal. The highest score was given to an expressive filly out of Chicca Blue by Chacco Blue, bred by Staj Mustang. Also of high interest was a colt by Quaid out of a sport successful Dutch mare, presented by Petr Lacina. Another Gold Medal foal by Quaid was presented by Eva Zacharova out of the Westphalian advanced (S) level successful Polany daughter Palmira. A possible successor to Quaid is the eight-year-old Calox by Cador/Lordanos, whom Staj Mustang acquired at the stallion market in Verden like most of his stallions. A few weeks ago he won the Czech Championship. On this trip he convinced with sporty foals, four of which could be awarded with a Gold Medal. Two of them were bred by Martina Zilinska, . Further Gold Medals went to offspring of the four-year-old Cornets Boy/Polytraum son Cortydor (two foals), Carebis by Calido Rebel Z (one foal) and Stocantes by Stolzenberg/Contendro (breeder is the internationally successful show jumper Marek Klus).

At the Bundeschampionate in Warendorf, Hannoveraner and Rhinelanders were hard-working medal collectors. They won three gold, three silver and five bronze medals.

Vitalos by Vitalis/De Niro (breeder: Josef Bramlage, Sögel) was celebrated with Leonie Richter as Bundeschampion of the four-year-old stallions - and that with three times the dream score 10 in the final for trot, canter and training. Only one tenth behind in the final classification was the Rhineland stallion Ibiza Dream by Asgard's Ibiza/Dimaggio (breeder: Axel Windeler, Verden-Walle), masterfully presented by Sina Aringer. With this top result, the private stallion became Vice Bundeschampion. In the four-year-old mares and geldings, last year's Bundeschampion and reigning Hannoveraner Champion Rock Festival by Rock Forever/Fürstenball took the bronze medal with his breeder Joline Durand in the saddle. The Vice Champion of the three-year-old mares and geldings was the Millennium/Fürstenball son Moonlight (breeder: Antonia Kurzrock, Wehretal). Marie Sybel sat in the saddle of the former Verden auction foal.

Great successes were celebrated in the dressage arena. In the five-year-old class, all three medals went to Hanover. In the exciting final, Boa Vista by Bon Coeur/Scolari (breeder: Ingo Pape, Hemmoor) took the title with Greta Heemsoth. The Hannoveraner premium prospect was followed by two licensed stallions. Only a tenth behind Boa Vista was the Dancier/Floriscount son Danciero (breeder: ZG Broers und Weber, Aurich). Eva Möller was in the saddle of the Weltmeyer prize winner. The trio on the podium was completed by Rod Laver by Rock Forever/Fidertanz (breeder: Simone and Thomas Visser, Dentlein) and Lena Stegemann. In the six-year-old class, a Hannoveraner and a Rhineland mare shared the bronze medal: the former Herwart von der Decken show winner Vanity Fair by Vivaldi/Sandro Hit (breeder: ZG Wencek, Sonsbeck) with Stefanie Wolf and Famous K by Finest/Londonderry (breeder: Martina Knetsch, Vorhop) with Leonie Richter. The black bay stallion was discovered at the Verden foal auction.

"Pure joy" reigned in Verden. Three daughters of the mare with this name, which could not be more fitting, won the Herwart von der Decken Prize for the best mare family in Hanover. The dressage champion mare was Hann.Pr.A. Va Pensiera. The yellow and white sash of the jumping winner went to Hann.Pr.A. Saja.

On Sunday, the World Champions of the five- and seven-year-olds were determined. In the five-year-old class, the Dancier/Floriscount son Danciero (breeder: ZG Broers und Weber, Aurich) with Germany's Eva Möller won the silver medal. Gold went to the DWB stallion Hesselhoej Down Town with Jeanna Hogberg from Sweden, third was the KWPN mare Lightning Star ridden by Dutch Kirsten Brouwer.

The last decision of the FEI World Breeding Championships for Young Dressage Horseswas made in the seven-year-old class. World Champion was the KWPN stallion Jovian with Andreas Helgstrand/DEN in the saddle. Second place went to Blue Hors Touch of Olympic L (DWB) with Nannan Skodborg Merrald from Sweden. The Westphalian Eternity followed in third place with Anne-Mette Strandby Hansen. The excellent fourth place in the strong field of participants was taken by the Quantensprung/Fidertanz son Quando Unico (breeder: Silke Groeneveld, Bunde) and Australian Simone Pearce.

The first medals were awarded on Saturday. Behind the KWPN stallion Kjento with Charlotte Fry, the Rhinelander Escamillo by Escolar/Rohdiamant (breeder: Dr. Carolin Langhorst, Ratingen) became Vice World Champion of six-year-olds with Spaniard Manuel Dominguez Bernal. The bronze medal was won by For Magic Equesta by For Romance/A Jungle Prince (breeder: Friedhelm Kühnen, Krefeld), who was presented by Beata Stremler from Poland. 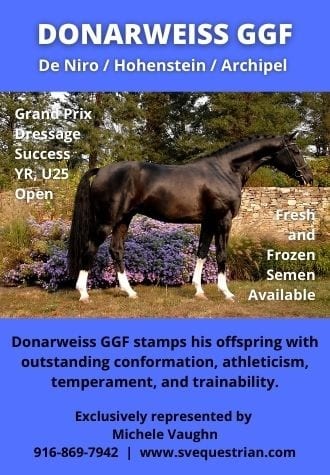