You are here: Home › News International › Assembly of Delegates on August 24, 2020 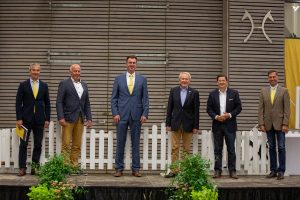 Verden. Dr. Hinni Lührs-Behnke was elected the new president of the Hannoveraner Verband. "The breeders are the heart of the association," said the 48-year-old. Ernestine Zwingmann from Lindwedel became chairwoman of the newly created supervisory board. It was a delegates' meeting that will go down in the history of the Hannoveraner Verband because in many areas the course will be set anew after the structural reform decided in February.

After the structural reform, numerous association committees were newly created. In the nine and a half-hour session marathon in the Niedersachsenhalle, Carsten Leopold, Bassum, was elected deputy president. He had previously been elected to the four-member presidium for the areas of finance, law, and personnel. Harald Thelker, Venne, was elected for the field of loyalty to/of breeders. Matthias Klatt, Hahausen, will take over the dressage area in the Presidium. The jumping part will be managed by Hergen Forkert. The delegates also elected Dieter Meyer, Verden, for the Marketing division.

Besides the Chairwoman, Ernestine Zwingmann, further members of the five-member Supervisory Board, whose main tasks are to advise and supervise the Presidium, will be Hendrik Hüsker, Syke-Wachendorf, as Deputy Chairman, as well as Matthias Bug, Petersberg, Achim Schacke, Wittingen, and Matthias Grupe, Groß Sisbeck.

Stefan Blanken, Hepstedt, and Anja Rietbrock, Sottrum, were elected to the Dressage Breeding Committee. Heide Peters, Hammah, and Oliver Ross, Thedinghausen, form the Show Jumping Breeding Committee. Iris Schless, Kevelaer, and Ulrike Edel-Heidhues, Bad Harzburg, focus on eventing. Last but not least, the delegates elected Norbert Bramlage, Dinklage, as Good Governance Officer. The chairmen of the district associations are still part of the committees. The newly elected presidium and committees will take up their work when the changes to the statutes that have become necessary for the structural reform have been confirmed by the responsible district court.

After a detailed review of the past year at the first assembly of delegates at the beginning of the year, Wilken Treu described the financial situation in his annual report and announced the "black zero" result. "Many events were canceled. We want to encourage you to get going again next year," he said. Breeding Director Ulrich Hahne also drew a positive balance of the breeding events, the highlight of which was the Herwart von der Decken-Show.

There was a longer discussion on the topic "Elimination of the age limit", which was voted on twice due to uncertainties in the interpretation of the motion. Also the discharge of the board and the management was only carried out after detailed consultation. For the discharge, the 2019 fiscal year was divided into three sections. On May 13, the then Managing Director Dr Werner Schade resigned. The delegates did not grant discharge for this period. In the following months, the management of the company was in the hands of Deputy Managing Director Dr Henrik von der Ahe. On 1 December Wilken Treu became managing director. For this time the management was discharged. The Board was not discharged.

Traditionally, the Fritz von der Decken Prize is awarded at the assembly of delegates to the most successful stallion raiser of the past ten years. For the second time after 2009, this valuable award went to Heinrich Behrmann from Stedebergen. Vanessa Feuerstein as speaker of young breeders emphasized the outstanding successes of the young breeders from Hanover and the Rhineland last year at the Federal Competition in Schwaiganger/Bavaria and at the World Championships in Stadl Paura/AUT.