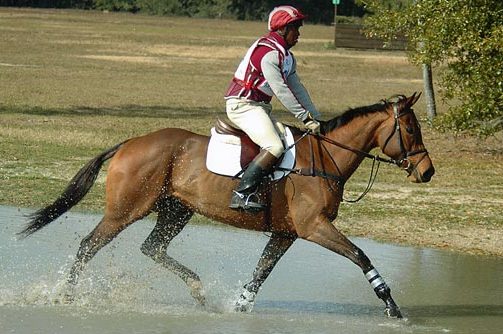 The AHS Central Office () is available to answer any specific inquiries that you may have.

Based upon the volume of telephone calls and written correspondence received by the AHS office it is apparent that the most consequential rules change concerns the revised studbook status for Thoroughbred mares. [The balance of this information also applies to Arabian and Anglo-Arabian mares previously accepted by AHS]. In 2008, Jockey Club-registered Thoroughbred mares are now eligible for entry into AHS’s Studbook with an overall inspection score of 7.0 or better, including a subscore of at least 7 for impulsion and elasticity (referred to as a “7/7” mare). Studbook Thoroughbreds may advance to the AHS’s Main Studbook through completion of the Mare Performance Test (MPT) with certain qualifying scores. These criteria are identical to those required of Hanoverian mares seeking to attain Elite status and are clearly defined in §9 (4) on page 29 of the rules book: “This means completing the AHS Mare Performance Test with an overall score of 7.0 or better (at least 21 points) or with an 8 and two sixes (20 points) or through provision of scores in competition.” As in Germany, AHS Main Studbook Thoroughbred mares are now eligible to produce stallion candidates.

This radical revision to the status of the many Thoroughbred mares (699 in the Pre-Studbook and 94 in the Studbook) that have breeding approval with the AHS has been made retroactive. This means that any Pre-Studbook Thoroughbred that scored at least a 7.0 on her original inspection is now eligible to be upgraded to the Studbook, with of course the provision that she also obtained a 7 for trot movement* (See 4/17/08 revision to procedure noted below). Those with the necessary scores in competition or in AHS’s MPT are eligible to be moved to the Main Studbook and the owners of four such mares have already exercised this option.

As an example, in 2007 the AHS accepted 18 new Thoroughbreds into the breeding program: 17 were entered into the Pre-Studbook while Dr. Laurie Cameron’s Endless Quest xx, with a 7.5 MPT score, was entered into the Studbook. As reported on page 202 of the 2008 AHS Breeders’ Guide, Stallion Directory and Mare Book, this select group of 2007 Studbook Thoroughbred mares also included three previously inspected mares (Mary Kristie xx, Miss Kilkee xx and Who’s In Front Now xx) that successfully completed the MPT in 2007, plus Chipola xx (eventing) and Good Karma xx (show jumping) that qualified through performance in sport. Based upon the rules now in effect these six mares are eligible to be upgraded to the Main Studbook and in due course could qualify as stallion mothers.

It would be a monumental task to retroactively upgrade all eligible Thoroughbred mares in the AHS’s breeding program. Additionally, these Thoroughbred studbook revisions are far-reaching in scope in that they affect subsequent generations as well. In other words, the Hanoverian daughters, granddaughters and great-granddaughters that trace back to a founding Thoroughbred mare may also be eligible for studbook upgrades. Each line has to be researched on a case-by-case basis which is time consuming to say the least.

During its February board meeting in Lexington, Ky., held in conjunction with the 2008 annual meeting, the board proposed a modest fee schedule for this upgrading process. A fee of $30.00 is now in effect to amend the Jockey Club papers of an AHS-approved Thoroughbred mare that is eligible to move from the Pre-Studbook to the Studbook, or alternatively from the Studbook to the Main Studbook.

A fee of $50.00 will be charged to reissue the registration papers of AHS horses that trace back to such Thoroughbreds. These newly issued papers would, of course, reflect the upgraded studbook levels subsequent to the recent rules changes. Thus far the central office has fielded dozens of membership inquiries and many AHS members have taken advantage of this new opportunity. If you have a Hanoverian horse or line of horses that you believe may be eligible for this benefit please write or e-mail the AHS Office () You will be answered promptly following the necessary pedigree research. In performing this work it has been determined that a number of AHS Pre-Studbook Hanoverian mares have been eligible to move from the Pre-Studbook to the Main Studbook, bypassing the Studbook altogether.

While on the subject of Thoroughbreds, there are two other significant rules changes concerning this particular breed. Previously a stallion candidate was required to be from two generations of Main Studbook mares, i.e. have both a Main Studbook dam and Main Studbook granddam. Under certain circumstances, the new rules in effect for 2008 will permit an AHS registered Main Studbook F1 Hanoverian mare (i.e. a mare with a Hanoverian sire and Thoroughbred dam) to be a stallion mother. The conditions are that the F1 mare herself must have scored at least an overall 7.0 or better on inspection, and her Main Studbook or Studbook Thoroughbred dam must have accomplished the same qualifying overall score, in addition to the necessary subscore of 7 or better for trot movement.

Heretofore, F1 warmblood mares of non-Hanoverian populations were ineligible for AHS inspection. Beginning this year, an F1 mare with an acceptable sire and a Thoroughbred dam, and with registration papers issued by a breed society or registry whose breeding program the AHS accepts, will be eligible for AHS inspection. Such an F1 mare would be scored under the same format that would have been required of her Thoroughbred dam. This means a 7/7 for entry into the AHS Studbook, with an additional possibility to performance test to the Main Studbook. We anticipate that this rules change will open up Hanoverian breeding opportunities to many domestically-foaled warmbloods that are half-Thoroughbred.

During its teleconference meeting of April 9, the board of directors of the American Hanoverian Society accepted an important revision to the ongoing procedure for studbook revisions and consequent pedigree upgrades. This revision concerns Thoroughbred, Arabian and Anglo-Arabian mares previously entered into AHS's breeding program. The balance of this notice refers to Thoroughbreds but applies to Arabian and Anglo-Arabian mares as well.

AHS rules pertaining to Thoroughbreds have evolved gradually over the years. The association first accepted this breed in 1988. The requirement was an overall 7.0 or better for entry into AHS's Pre-Studbook with no minimum subscore requirement for impulsion and elasticity (the trot). The rules were modified in 1996 to permit Pre-Studbook Thoroughbreds to advance to the Studbook through completion of AHS's mare performance test (MPT) with an overall score of at least 7.0 (21 points).

The next revision took place in 2005 when Thoroughbred mares were permitted to be shown at liberty for a trot score, provided the judges considered the facilities safe to do so. Usually, but not always, the trot score when shown free is one point better than that shown in-hand. This is the scenario under which Thoroughbred mares are currently judged for possible entry into AHS's breeding program.

An analysis of this breed in the AHS's database shows that the Society has a current total of 699 Pre-Studbook Thoroughbred mares. It follows that all would have gained at least an overall 7.0 or better upon inspection, but not necessarily a subscore of 7 for the trot. Actual figures are that 219 (31%) of the 699 did not score a 7 for trot movement. However, of these 219 mares, only 57 (8% of the entire Thoroughbred Pre-Studbook population) have produced AHS-papered Hanoverian mares that have themselves been entered into the studbooks. This number, 57, is unlikely to grow significantly as the number of Pre-Studbook Thoroughbred mares foaled in 1989 or later (i.e. 18 years of age or younger) is precisely one.

The board discussed that this group of 219 mares, (but in reality only the 57 that have produced AHS broodmares), had never been given the opportunity to be judged for a free-running trot movement. Accordingly the board passed the following motion:

Motion that all AHS Thoroughbred, Arabian, and Anglo-Arabian Pre-Studbook mares should be retroactively eligible for an upgrade to the AHS Studbook upon request. Passed.

The board feels that is an eminently fair solution to a previously inequitable situation. The Executive Director will individually contact those members whose requests for upgrades were declined earlier this spring advising them of this policy change.