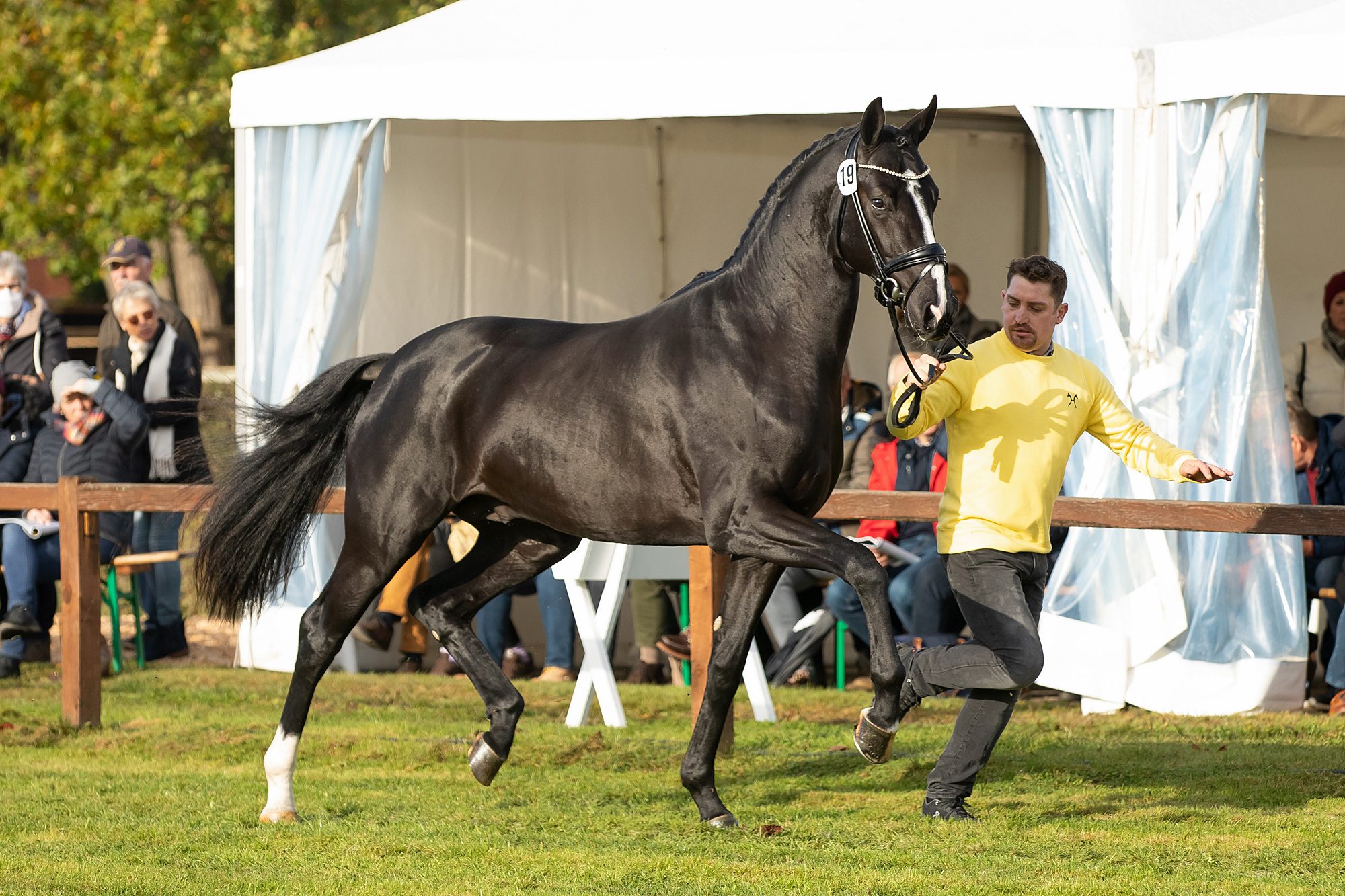 The black stallion by Escamillo/De Niro was sold to the Netherlands for 700,000 Euros. Photo: Hannoveraner Verband

Verden. The Verden stallion licensing was characterized by stallions with the initial letter E, which again give new impetus to the proven Adeptus xx line. First and foremost was a premium stallion by Escamillo, who achieved the top price of 700,000 Euros. 55 dressage stallions participated, 31 of which were licensed. Six of them left the Niedersachsenhalle as premium stallions. The licensed stallions were sold for an average of 125,346 Euros.

The Escamillo/De Niro son (breeder and exhibitor: 2M2 Horses I Bastad AB, Bastad/SWE) was as powerful on the last day as he was on the first. His dam already delivered two licensed sons. This convinced a Dutch stallion owner, whose sires have been among the best in top sport for many years. For 700,000 Euros the bid was accepted on phone.

The first premium stallion to be auctioned off was a brown by Bon Coeur/Carabas (breeder: Dirk Schröder, Lentföhrden, exhibitor: Christine Klaewer, Lentföhrden) from the line of the stallion of the century, Weltmeyer, for 300,000 Euros. Cheers erupted when auctioneer Frederik De Backer announced: "And he goes to the State Stud Celle!". For 370,000 Euros, the Klosterhof Medingen secured a true "mucle man", a chestnut by Totilas/Danciano (breeder: Josef Brinkemöller, Georgsmarienhütte, exhibitor: BG Brinkemöller and Westendarp, Wallenhorst). He also has best genetics, figureheads of the Arma line are the sires Chasseur I and II as well as Wolkentanz I and II. Shortly before, Burkhard Wahler, who handed over the management of the Klosterhof to his son Christoph at the beginning of the year, was awarded the Fritz von der Decken Prize in the show programme as the most successful exhibitor of the stallion licensing of the past ten years.

The premium stallion by Fürst Belissaro/San Remo (breeder: Jan Schomaker, Wischafen, exhibitor: Heinrich Gießelmann, Barver) found a new owner in France. The knock-down price for the strong moving bay stallion out of the line of the stamp stallions Pik Bube I and II was 210.000 Euro. The buyer of the premium stallion by Escolar/Sir Donnerhall (breeder: Hermann-Josef Thoenes, Grefrath, exhibitor: Theo Lenzen, Nettetal), who was characterized by great elasticity in his movements and cost 180,000 Euros, had already discovered Bundeschampion Va' Pensiero in the Niedersachsenhalle two years ago.

The sixth premium stallion by For Dance/Dagostini (breeder: Christoph Plate, Beverstedt, exhibitor: Blue Hors ApS, Randbol/DEN) will move into a box at the Warendorf State Stud. He participated only in the licensing.

The 26 licensed stallions achieved a total average price of 125,346 Euros, which is about the same level as last year. The demand within Germany was strong, 22 two-and-a-half-year-olds will not leave their country of birth. The 22 not licensed stallions cost an average of 38,364 Euros.

For the first time, the stallion licensing of the Hannoveraner Verband is not only held separately by discipline but also with a four-week interval. The showjumping stallions will make their grand entrance from December 2 to 4. One of the highlights will be the Hannoveraner Jumping Masters, where four to eight-year-olds will demonstrate their great talents over the jump.