Impressive Appearance of the 2018 Vintage 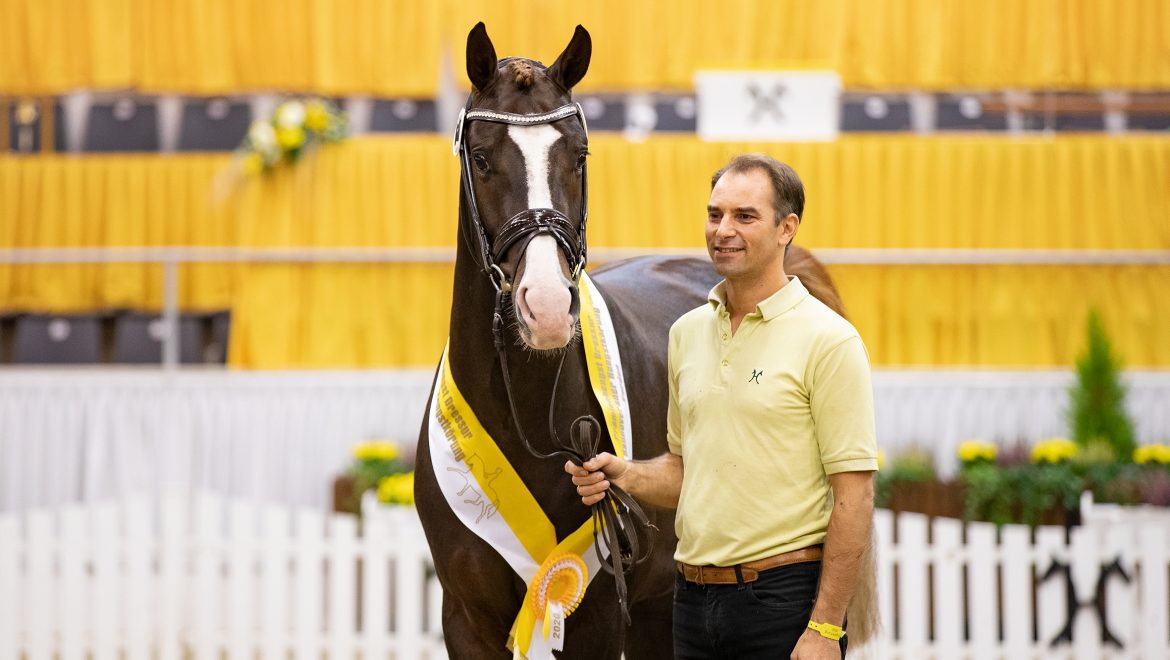 Verden. With the auction of the dressage stallions, the stallion licensing and stallion sales of the Hannoveraner Verband ended with an absolute highlight. After 17 stallions with modern jumping genes had already been licensed two days before, 25 two-and-a-half-year-old colts with exquisite dressage pedigrees received the positive licensing result. Eight of them were awarded a premium. The top price was 490,000 Euros, on average 126,409 Euros had to be invested for a licensed dressage stallion.

A dark chestnut by Sezuan/Sir Donnerhall (breeder: Gestüt Neff, Frankenberg, exhibitor: Pascal Kandziora, Spelle) out of the best dam line already convinced on the triangle. The impressive poverful mover aroused great desire. After the exciting bidding duel, the stallion was sold for 490,000 Euros to a customer from Schleswig-Holstein. For his exhibitor Pascal Kandziora the Niedersachsenhalle is a happy place, last year he had already prepared the top price colt for the licensing. Number two on the price scale was a son of Bon Coeur/Fürst Nymphenburg (breeder: Bernhard Dodenhof, Bülstedt, exhibitor: Nicole Schachtmann, Nürtingen), who will be travelling for 380,000 Euros to Helgstrand Dressage in Denmark. He will be accompanied by three other stallions. "The standard for the premiums was set very high," said Hannes Baumgart. The dressage rider and renowned trainer and breeder belonged to the licensing commission for the first time.

The most expensive stallion without a premium was a son of Farrell/Livaldon (breeder: Wienke Winkelmann, Wurster Nordseeküste, Ausst: Dr. Kerstin Klieber, Meinersen). The sunnyboy out of the damline of Stange will move for 110,000 Euros into a box at the stallion station of Gerd Sosath, Lemwerder, The State Stud Celle acquired three two-and-a-half-year olds: a bay by Diamond Hit/Lauries Crusador xx (breeder: Stefanie Meyer, Allwörden, exhibitor: Jochen Meyer, Allwörden), a bay Foundation/Competent (breeder and exhibitor: Dr. Michael Lühs, Wagenfeld) and a son of Zoom/Fürst Nymphenburg (breeder: Ludwig Fuchs, Meinerzhagen, exhibitor: Anneli Brunckhorst, Hollenstedt). A son of Quando Unico/San Amour (breeder and exhibitor: Heinrich Gießelmann, Barver) will leave in direction of the State Stud in Warendorf.

The auction of the dressage stallions was opened by a varied show programme. Already in April, the privately owned stallion Foundation was awarded the Grande Prize. Now the bay stallion was honoured in a festive setting. Furthermore, the Mare of the Year, St.Pr.St. Daylight, was celebrated.