The foaling season is coming to an end. And with that, the foal registration really gets going - our registrars are currently spending more time on the road than in the office. The big trips to Poland and France have been made. Now it's on to Austria, the Czech Republic, Sweden, and Denmark, among others.
Of course, we also take a look at Tokyo. In this newsletter, you can read which Hannoveraner and Rhinelanders will be competing in Tokyo and which medals have already been won.

And soon the FEI WBFSH Dressage World Breeding Championships for Young Horses will take place in Verden again. Of course, you will also find out which Hannoveraner and Rhinelanders are qualified. 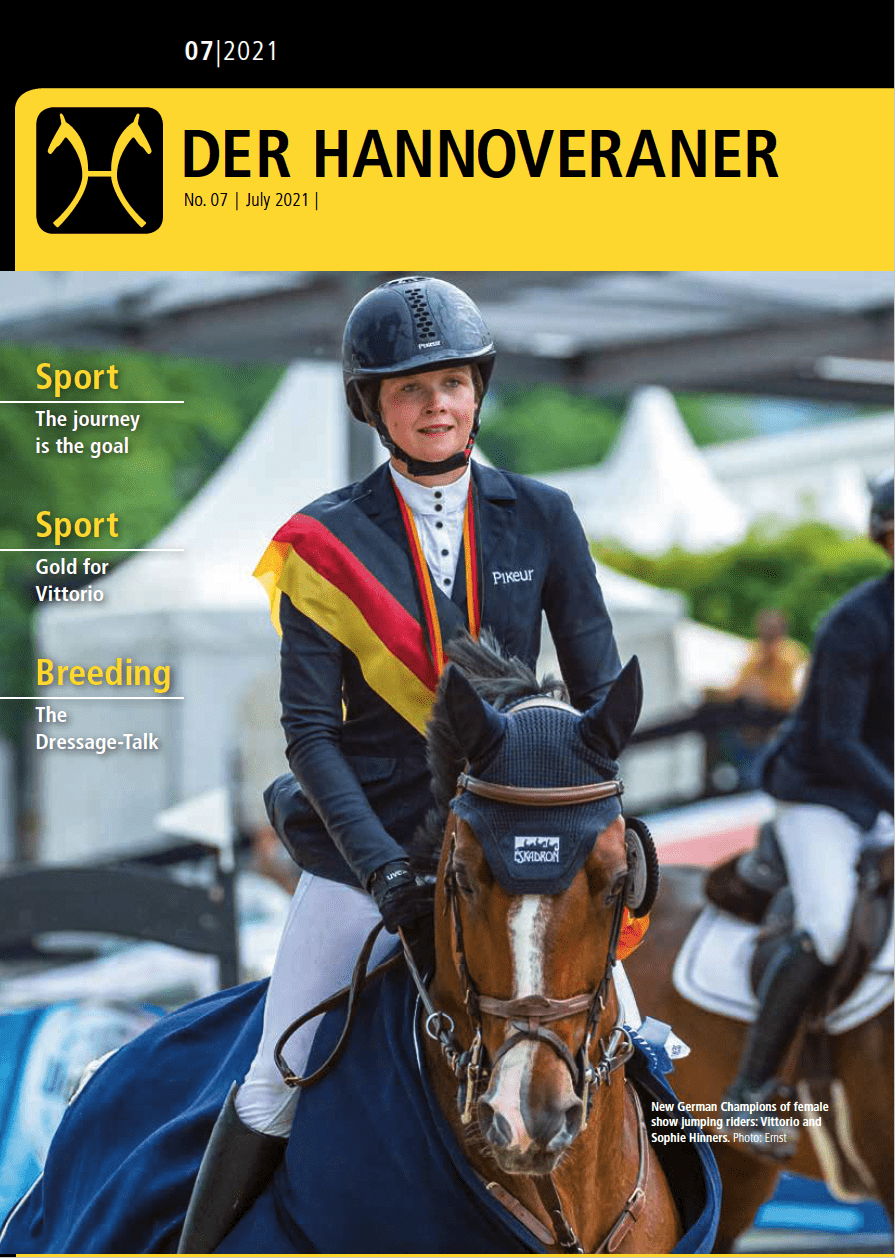 Notification of birth and covering certificates via MeinHannoveraner

Please do not hesitate to contact Tanja Coors at  if you have any questions.
Innovation: You would like to start with your breeding and you don't have a breeding certificate yet? If your mare is not yet registered with us, we will be happy to issue you a blank breeding certificate. You can order this online athttps://link.edgepilot.com/s/5ff774f1/AzjzUovnKkaNM3w3g_5kGw?u=https://en.hannoveraner.com/hannoveraner-zucht/deckscheine/.

We continue to be optimistic and plan our registration trips.

The current schedule can be found at https://link.edgepilot.com/s/124d781e/jA-ooTrkq0mvp-ybsIJ8OQ?u=https://en.hannoveraner.com/hanoverian-breeding/.

Poland in an upward trend

The Hannoveraner breeders in Poland met again this year in Kunowo at the Roszkiewicz family's stud farm for a central event, which included both a mare performance test with awards and a foal show. Thanks to the commitment of Peter Kuczinsky and the Roszkiewicz family, the Hannoveraner community in Poland is growing steadily and this year, too, new members were welcomed and more foals were registered. A total of nine foals were awarded the Gold Medal. The high number of Gold Medal foals is a good indication of the high quality of this year' s vintage of young Hannoveraner in Poland.

Calua by Cornet Obolensky/Quintender was awarded as the best jumping mare in the mare performance test (breeder and owner: Dr. Roman Roszkiewicz).

The four-year-old Diagara by Diacontinus/El Bundy (breeder: Willi Pott, Bargstedt; owner: Mateusz Kowalczyk) was awarded the title of overall champion mare and mare with the best basic gaits. In addition, Victoria van Gogh by Van Gogh/Diarado (breeder and owner: Agnieszka Gronowska, Warsaw) was awarded the Hannoveraner Premium.
The foal show was won by a dark chestnut filly by Benicio/Diamond Hit bred by Agata Fornalska, Mierzyn, who was awarded a Gold Medal.

North, south, east, west - the Hannoveraner Verband's registration tour through France once again led to almost all regions of this beautiful and diverse country. In addition to Eduard Dewez, the chairman of the French Hannoveraner horse breeding society AFEACH, and Dr. Ludwig Christmann from the Verband's headquarters in Verden, Bo Eitenmüller was there for the first time.  A total of 77 foals and 23 mares were newly registered. Although the number of registered foals is lower than last year, there is a large number of regular breeders who present very high quality foals every year. This is expressed by the high number of 19 foals that were awarded a Gold Medal. Five foals could be selected for the Verden Online Auction International, five of which had received a Gold Medal. A special attraction is a right sister to D'Avie, the World Champion Young Dressage Horse of 2018 and 2019, which the renowned Haras de Hus, Petit Mars, is making available to the auction. The other auction candidates descend from In My Mind, Lord Europe, Bon Coeur, Sir Sandro and Emilio Sanchez.

The top-priced horse at the Verden Auction Online in July was Saint Jacques, for whom the virtual hammer fell at 56,500 Euros. After the ten-day auction period in Verden, which was used by numerous interested parties to try out their dream horse, an average of 20,205 Euros had to be paid for the 56 young talents. This is the highest mark achieved so far at an auction in July. 34 horses will leave Germany. Nine horses are going to the United States, five to Finland and four to France.

The collection of the Verden Auction in August holds a selection of hand-picked auction foals for dressage and show jumping as well as a broodmare. The auction foals present themselves online with an individually customized presentation profile and video so that you can get an idea of the auction candidates.
The auction of the foals will take place online. Bids can be submitted from August 1. The auction will finally take place in two parts on August 7 and 8. To bid, register at https://link.edgepilot.com/s/eec4f1d8/mm_TFYvCk0_g3XHlyyxtAw?u=http://www.verdener-auktion-online.com/.

The Verden Foal Spring ended on July 1st. The top priced foal of the auction final was Millie Margaux, who found a new owner in Brandenburg for 41,000 Euros. On average, the 33 Hannoveraner and Rhineland foals changed owners for 9,167 Euros.
Eleven times, customers from abroad got the final bid. Two foals each will start their journey to Belgium and Great Britain.

Jumping horses
The first decision in the classes of the show jumping horses was made in the four-year-old class. Catch Me M by Cador/Silvio (breeder: Peter Mahler, Neuhaus/Oste) led the field with the highest score. The Hannoveraner premium candidate, ridden by Christian Temme, was already highly awarded at last year's Herwart von der Decken-Show. Two Hannoveraner were awarded the title of Vice-Champion. Cornet's Lightning by Cornet's Boy/Arpeggio (breeder: Günter Mulder, Goch), who found a new owner at the Verden stallion seles two years age, and the Lord Fauntleroy/Lordanos daughter ATC's La Rochelle (breeder: Hendrik Schäfer, Köchingen), ridden by Anja-Sabrina Heinsohn, came second with equal scores. The bay had been one of the pearls of the collection at the Verden auction only in January of this year.
In the strong class of five-year-olds, Coredo M&M by Carridam/Loredo (breeder: Pferdezucht Dr. Jacobs GbR, Bierbergen) took the title. Last year, the premium stallion and former Verden Auction horse had already won premiere of the Hannoveraner Masters for show jumpers with Alexa Stais last December. The Celle state stud stallion Diathletico by Diacontinus/Escudo (breeder: Wilfried Griesbach, Neustadt) was not far behind. The Stakkato Prize winner became Vice Champion with Alexander Uekermann. Another stallion followed in third place: The Orlando/Check In son Otto de la Roche (breeder: Elke and Claudia Tegtmeyer, Norderney), Vice Champion of the previous year, was ridden by Oliver Ross and licensed for Hannover on this occasion.
After the exciting jump-off of the six-year-olds, the Diarado/Contendro son Doom SR (breeder: Gestüt Greim, Bärnau) was crowned Hannoveraner Champion. Harm Lahde was in the saddle of the licensed stallion. With his homebred Cosima by Casallco/Chacco-Blue, Harm Wiebusch finished second. The Rhineland registered Campino MR by Colestus/Clinton (breeder: Marius Rittstieg, Seeburg) and Roman Duchac took bronze. This is the third top placing for the bay stallion in the Hannoveraner Championships. Two years ago he was Champion of the four-year-olds and last year he was third of the five-year-olds.
Harm Lahde and Harm Wiebusch also had a thrilling duel in the seven-year-old class, and again Harm Lahde kept his nerve in the jump-off. He won the Hannoveraner Championships with Fipi N by For Pleasure/Grosso Z (breeder: Ratje-Friedrich Niebuhr, Schwarme) ahead of Harm Wiebusch, who rode the Messenger/Centadel son Melypso Blue PS (breeder: Lewitz Stud, Mühlen). Alexa Stais took her second place on the podium after winning the five-year-old class and finished third with Everton PJ by Embassy/Light On (breeder: Pferdezucht Dr. Jacobs GbR, Bierbergen).

Dressage horses
Already on Wednesday the decision was made in the six-year-old dressage horses. The Fidertanz/Sandro Hit-daughter Fleur de Vie (breeder: Dr. Cord Gaus, Großmoor) won the yellow-white sash and can call herself Hannoveraner Championesse in the future. The Hannoveraner premium prospect was presented by Leonie Bramall. The silver ribbon went to the Rhineland horse Elektra di Fonte Abeti by Franklin/De Niro (breeder: Luisa di Antonelli, Italy) with Frederico Migue Mexia de Almeida in the saddle. The bronze medal went to the former Verden auction foal Famous K by Finest/Londonderry (breeder: Martina Knetsch,Vorhop) and Leonie Richter.
Best five-year-old dressage horse was the privately owned stallion Danciero by Dancier/Floriscount (breeder: ZG Broers und Weber, Aurich) with Eva Möller. The black stallion had been awarded the Weltmeyer Prize last year and had represented Hannover's colours at the Bundeschampionat as Hannoveraner Riding Horse Champion. He was followed by the Bon Coeur/Scolari daughter Boa Vista (breeder: Ingo Pape, Hemmoor), who was guided through the lessons by Greta Heemsoth. The dam of the Hannoveraner premium candidate is none other than the 2013 World Champion of young dressage horses, Scara Boa. Third in the five-strong starting field was the DeLorean/Stedinger son DeLaurentis (breeder: Elmadin Löcke, Tiddische), who once found his way to the stable of his current owner via the Verden stallion sales. In Verden he was ridden by Esther Maruhn.

The German dressage riders won the gold medal at the Olympic Games. Among the glorious Olympic winners were Showtime FRH by Sandro Hit/Rotspon (breeder: Heinrich Wecke, Stadthagen) and Dorothee Schneider. Silver went to the USA. The San Remo/Ramiro's Son II son Sanceo (breeder: Gerhard Dustmann, Melle) and Sabine Schut-Kery as well as Salvino by Sandro Hit/Donnerhall (breeder: Joachim Essink, Stockach), who was ridden by Adrienne Lyle, made a significant contribution to the precious metal. Bronze was won by the team from Great Britain.

After the Grand Prix qualified for the freestyle final in Tokyo:

The Hannoveraner stallion Don Principe has passed away at the age of 32. The son of Donnerhall out of a dam by Prince Thatch xx was bred by Adelheid Brüning, Ochtmannien. The bay stallion was discovered by Maryana Haymon of Marydell Farms/USA during her first Breeding Orientation Course of the Hannoveraner Verband in Germany. At the pre-selection for the licensing Don Principe was not selected.  He passed his 70-day test as third best and was subsequently licensed by the Hannoveraner Verband. He then moved to the ownership of Maryana Haymon. He was used in the USA in both breeding and sport. Probably his most famous son is Doctor Wendell MF, who was shortlisted for the 2021 Olympics for Russia. Maryana Haymon mourns the loss of Don Principe and his impact on breeding in the US. In 2003, Don Principe was USEF Dressage Breeding Sire of the Year.

One has to be optimistic these days. Therefore, pending on the development of the Covid 19 pandemic we plan for a  Breed Orientation Course in 2021. We have scheduled it from October 30 until November 6 in connection with the stallion licensing for dressage stallions. This course has become iconic. It is an in-depth learning experience, offering lectures on bloodlines in Hanover and on the Hanoverian breeding programme. It includes the practical judging of horses, visits to the State Stud at Celle, to the stallion performance testing station at Adelheidsdorf and to other studs and breeders’ farms. A very special highlight is the Hanoverian stallion licensing on the final three days of the course.

As the number of participants is limited, applications will be accepted on a first come basis.