Forsyth FRH: A Lot Made from Very Little 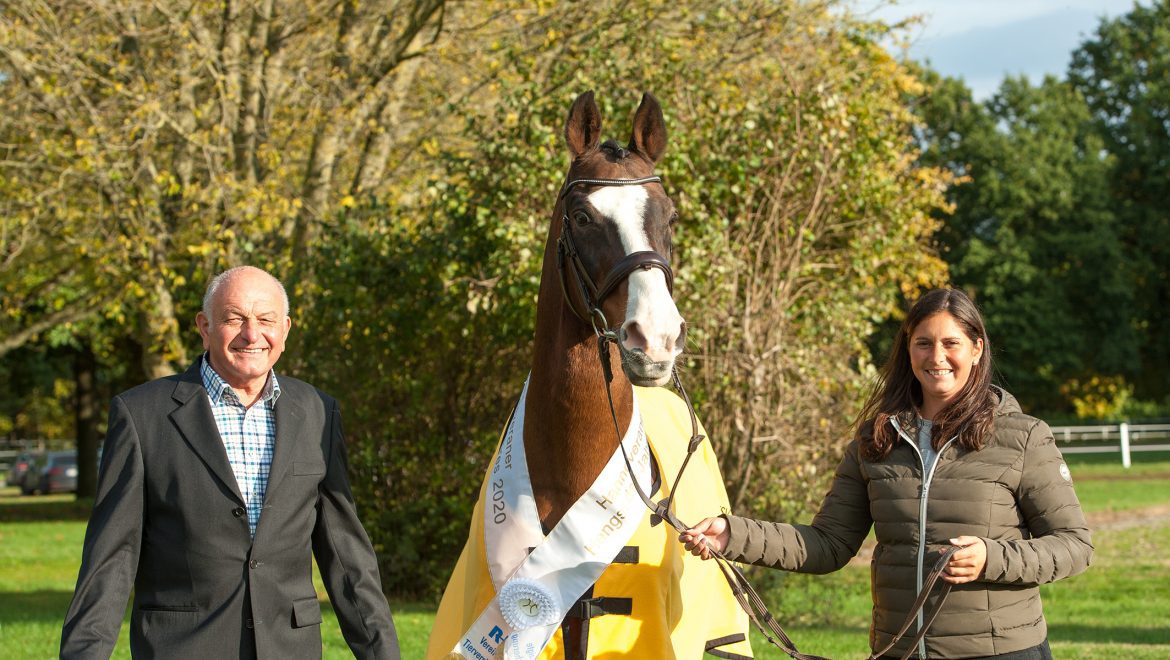 Verden. Nobody would have expected him: Forsyth FRH was awarded Hannoveraner Stallion of the Year. The powerful bay jumper has not only been successful in the show jumping course up to Nations Cups, but with his daughter Fine Lady he also has successful offspring up to the Olympic Games. On behalf of the deceased breeder, his son Heinrich Eckhoff accepted the valuable award at the Verden Stallion Licensing.

Forsyth's career began almost exactly 23 years ago to the day in the Niedersachsenhalle. Jochen Meyer, Allwörden, had brought the athletic son of For Pleasure/Dorian. bred by Heinrich Eckhoff senior, Beckdorf, to the licensing. There he convinced in free jumping and belonged to the 1st lot of the Celle State Stud. In Adelheidsdorf he took his 300-day test as third in the sub-index jumping and then headed for the sport. Forsyth was introduced to sport by Holger Baum, who runs a breeding and training stable with stallion station with his family in Hofheim-Wallau just outside Frankfurt. Holger Baum's daughter Nicole Wenz rode the stallion to a brilliant eighth place in the 2001 Bundeschampionat before he went hunting for ribbons internationally with Toni Haßmann. The pair competed twice for Germany in the Nations' Cup, they were to be found in the results lists at the Aachen Soers as well as at many other renowned show grounds throughout Europe. Distinguished with the addition to his name of the supporters club for Hannoveraner sport horses (FRH), Forsyth FRH returned to the Fohlenhof in 2006 and celebrated numerous successes with the then 16-year-old Franziska Baum-Gundlach. In 2012 his career in sport came to an end.

During his time in sport, Forsyth was available to breeders through Holger Baum's stallion station and the State Stud Celle. In terms of breeding, the medium-sized bay stallion never had the greatest popularity. His offspring are said to have sensitivity and fighting spirit. But the 25 year old has made an incredible amount out of the few chances he had. Only 253 offspring have him as a sire. His only licensed son is For Edition bred by Holger Baum, who not only won his stallion exam but was also successful internationally up to 1.60 metres with the US American Taylor Land. Out of 136 registered show horses, 40 have been successful in advanced level show jumping - that is almost every third registered show horse that has Forsyth as a sire. 22 of his sons and daughters collected ribbons in international courses for ten different nations. One daughter won an Olympic medal: With Canadian Eric Lamaze, Fine Lady jumped to bronze in the individual ranking in Rio de Janeiro 2016. The breeding value for the highest achieved class for Forsyth FRH climbed to 144 points last year. This is about the same as the breeding value calculated on the basis of the results of the mare performance tests, which is 147.

Together with R+V/Vereinigte Tierversicherung, the Hannoveraner Verband has been awarding this prize to an important Hannoveraner stallion since 1992. In addition to a highly endowed cheque, the breeder receives a valuable oil painting from the studio of Manfred Busemann.