Fidertanz Dances to the Top 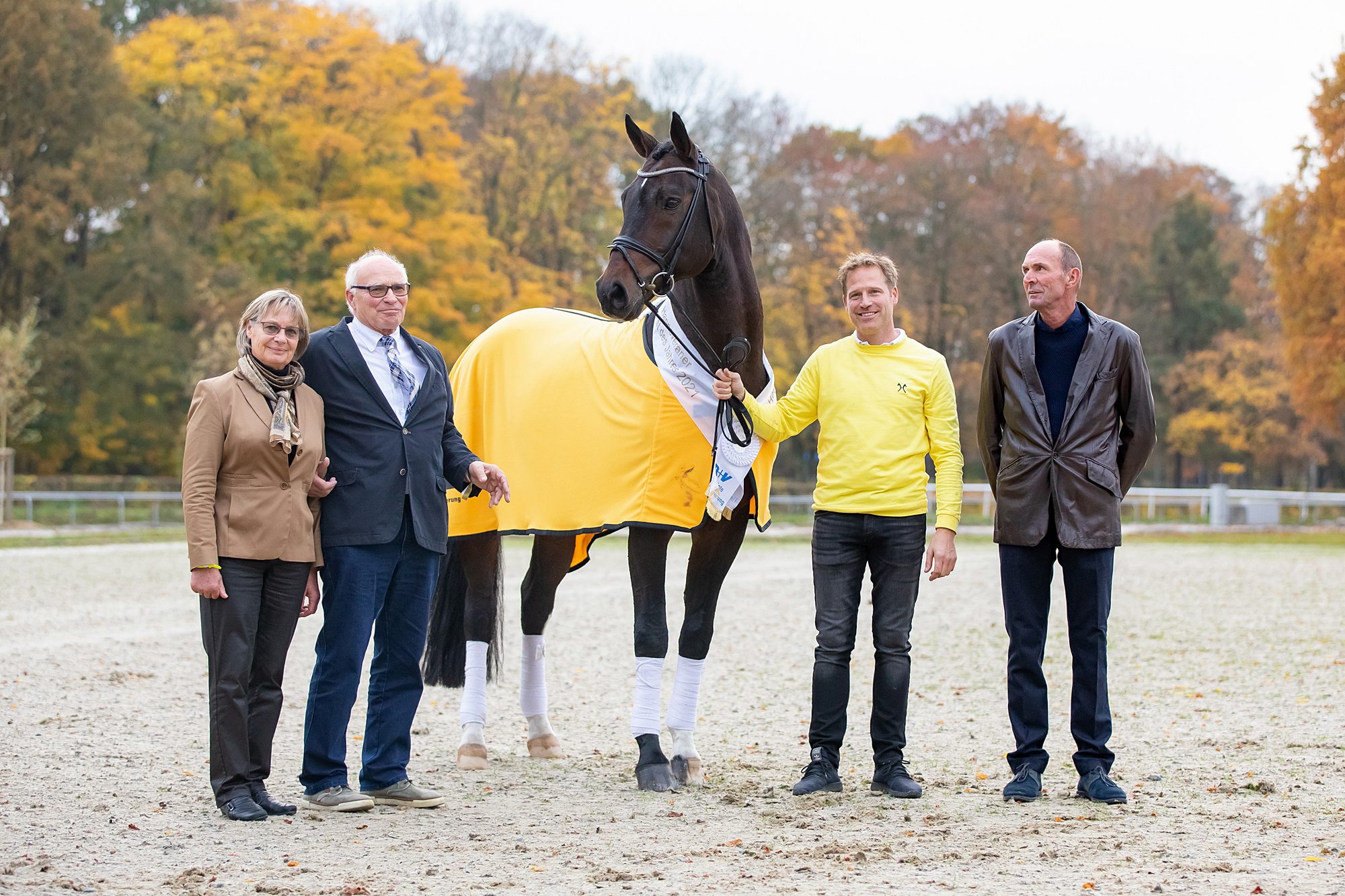 Verden. The excitement was great: On the last day of the Verden stallion licensing, the secret was revealed. The Fidermark/Ravallo son is Stallion of the Year 2021. He was awarded in a very emotional ceremony in true stallion style and did his lap of honour in front of the enthusiastic audience in the Niedersachsenhalle.

This was the second time this year that the Schult family had reason to celebrate in Verden. In August, three sisters of Fidertanz had won the Herwart von der Decken Prize as best mare family. The dam's name could not be more fitting: "Reine Freude" – "Pure Joy".  Through her son, the State Premium mare from the dam line of Jucking has gained worldwide importance. Fidertanz, registered in the Rhineland, was born on May 23, 2002. From the very beginning he impressed with his riding horse qualities. As winner of the licensing in Münster-Handorf he was discovered by the Böckmann stallion station. At the age of three, Fidertanz became Vice Bundeschampion with rider Maike Lührig, passed his disposition test in Neustadt/Dosse as best and passed his further performance test in sport with the qualification for the Bundeschampionat of five-year-old dressage horses. With rider Antonio Teixeira do Vale, Fidertanz finally reached Grand Prix level.

From 2005 to 2008 Fidertanz was stabled at Klosterhof Medingen before he moved into a box at the Böckmann stallion station in Lastrup. Word of his qualities got around. In the year in which he becomes Stallion of the Year, the German Equestrian Federation reports exactly 1,000 successful offspring in competition. Foundation and Franziskus belong to the German top class in the dressage ring together with riders Matthias Alexander Rath and Ingrid Klimke. Their successes contributed significantly to Fidertanz's outstanding seventh place in the current WBFSH-ranking of the best dressage horse sires worldwide. That his offspring are quite versatile is proven not only by Finest Fellow, who is competing up to CCIO4* with Elena Otto-Erley, but also by the chestnut mare Fairytale, who carried Germany’s Anna Lena Schaaf to the Vice European Championship title in Malmö. The breeding value of the German Equestrian Federation of Fidertanz in dressage has reached the legendary mark of 150. 18 sons are licensed for Hannover, eleven are currently registered in the stallion book I. 101 foals and 72 riding horses sired by Fidertanz found new owners at the Verden auctions. Besides Foundation and his two high-priced full brothers Crystal Friendship and Flavio Briatore, premium stallion Feuerspiel caused a sensation in 2009 with a knock down price of 330,000 Euros at the stallion sales.

Together with R+V/Vereinigte Tierversicherung, the Hannoveraner Verband has been awarding a prize to an important Hanoverian stallion since 1992. In addition to a highly endowed cheque, the breeder receives a valuable oil painting from the studio of Manfred Busemann.