Dedicated dressage riders looking for their next prospect will want to visit this charismatic colt. He possesses the qualities we seek in a top dressage prospect and his carefully designed pedigree that balances some of the best of Dutch and German dressage breeding promises his FEI future.  He received excellent comments at his recent Hanoverian inspection – in particular his correct foundation, harmonius balance, and pure gaits.

Sire Desperado NOP (Vivaldi-Havidoff) is one of the current international Grand Prix stars under Emelie Scholtens.  Desperado has earned scores as high as 85% under demanding panels of international judges and was on the 2019 Silver Medal Team at the European Championships.  Desperado is also a highly respected sire with 16 approved sons including the popular Ibiza.

Diplomat’s dam is an Elite/Premium mare with the Hanoverian Society, earning an impressive 7.86 at her studbook inspection which tied for the high-score of that year’s inspection tour.  She was a previous National Champion for the AHS Futurity and was Reserve Champion in the USDF Horse of the Year standings.  Relevè is by the FEI stallion Royal Prince, who finished 4th at the FEI World Championships for Young Horses and is out of the Elite Mare Comtesse (aka Cha Cha) who descends from a highly-respected mare line in Germany.  Relevè has passed her beautiful type and expression to this colt.

Diplomat’s registration with the American Hanoverian Society is in progress.  Board through weaning is included as well.  Hilltop Farm also offers long-term Raising Services for young horses if needed. 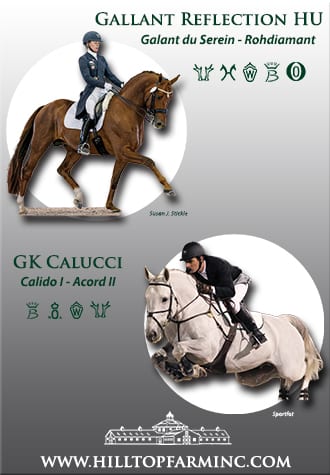